Louis XIV’s parks and town of Versailles (1661-1715) are universally envisioned as emblematic of French formal gardens and their subsequent urban developments. As such, their overall layout integrating landscape and town within one unified large-scale composition has inspired modern urbanism and regional planning as well as postwar urban design. Examples are manifold: from the McMillan Washington plan (1901-02) or French social housing Grands Ensembles to Lucio Costa’s Brasilia scheme or former OMA Xaveer de Geyter’s After-Sprawl “strategies” (2002). Symmetrically, from the early 20th century, this legacy started to influence a certain narrative of history. Seventeenth century gardens are therefore understood, for better or for worse, as the “laboratory” where some modern or current territorial and landscape conceptions find their origins (Giedion 1941, Mariage 1984). On the one hand, these gardens are thought to pertain to the world of classical physics and the Scientific Revolution, implying a continuous, homogeneous, and infinite space heralded by the earlier invention of perspective (Benevolo 1991). On the other, they are seen as the product of political absolutism and the artistic sense of infinity, specific to the Baroque age (Baridon 2008). Landscape aesthetics is thus coupled to epistemic change, technological progress, dominion over nature; it is paralleled with French military imperialism, good governance, proto-capitalism and estate management (Scully 1991, Mukerji 1997) − all such factors being considered as closely entwined.

In summary: one can ultimately come up with a double perspectival and territorial model in both practice and historiography. But what perspective and what territorial economy are we faced with: on the ground (materiality of the site) and over the Old Regime era (land institutions)? These are the topics that this lecture will introduce to.

To do so, we’ll start by questioning one episode in the history of technology dealing with some improvement in optical instrumentation, initiated in astronomy by the Académie des sciences from 1666 and thought to be responsible for the spatial extension of gardens. This improvement first consisted in applying a telescope to triangulation and leveling operations. Since it was subsequently transferred from geodesy to land survey, historians have established a conjunction between different groups of works: measuring the Earth and the renovation of the kingdom’s cartography; elevation measurements near and beyond Versailles for water supplies; the digging of the Grand Canal in the adjacent park from 1668. Our first contribution to the field will be to undo this rationale by demonstrating how, despite its seductiveness, it is simply inconsistent. 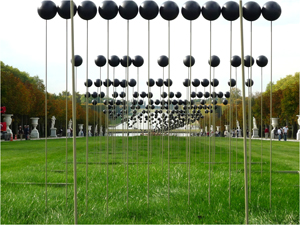 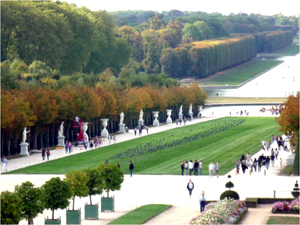 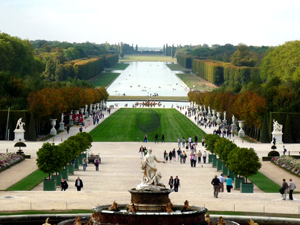 The Moon: anamorphic installation on the Allée Royale at Versailles by French artist Xavier Veilhan (Sept.-Dec. 2009). It indirectly reflects the way the whole perspective of the Grand Canal actually operates.

Our next step, will be the consideration of the physical and technical conditions of what ought to be defined as “topographic perspective”, that is the application of optics to the terrain. Through case studies of given sequences of parterres, terraces, and canals designed by Le Nôtre and collaborators, one can recognize the invention of original optical-geometric devices. Inspired by the theoretical premises of perspective and their mechanical and spatial deployment, as registered in technical literature and workshop practices, these devices nonetheless constitute unprecedented responses to the potentials of a given site. Using survey, calculation, and precision drawings, visual alignments and anamorphoses can be identified as the major means for achieving a joint construction of gaze and body’s motion. Long sought-for by royal gardeners, this technical transfer from the visual arts to landscape architecture was not only related to the king’s works. It was ultimately responding to a particular evolution within the framework of land institutions.

In fact, one needs to question the socio-economic conditions of the spatial implementation of perspective in formal gardens. What kinds of land were involved? What types of enclosure were structured? What social stakes were underpinned? To explore this field, one can refer to a crucial text: Savot’s treatise on architecture published in 1624. It was not illustrated. However it carefully describes the layout of the core of a manor within which garden and park appear to be two distinct but complementary entities. Most of all, the park is explicitly defined as a multifunctional infrastructure, an enclosure where pleasure, production and profit are inseparable. Property values, timber prices, land investment, or tax management prove to be actually the main issues involved in reconfiguring gardens and parks within estate enlargement and in building extended “perspectives” on the ground.
In developing unprecedented spatial devices, perspective applied to landscape proves to be a branch of optics and both the instrument and outcome of a socio-economical process. And since in garden history the philosophical interpretation of perspective has been deeply influential, an economic and technical rethinking of its use should contribute towards nothing less than a shift in landscape epistemology.