Interest in Islamic art is a phenomenon that has existed in Europe since the Crusades and has been influenced by hostile, but often also fertile contact to the Islamic world. With the Enlightenment in the 18th century, Europeans increasingly developed a fascination with the Orient and turned to the Islamic garden and its mysticism for inspiration. The first academic studies appeared on the subject at the beginning of the 20th century.

1.  The Roots of the Islamic Garden: from Paradeisos to the first walled gardens
The paradise garden can be attributed to the time of the Achaemenid Empire in the large area of the Marv-Dasht east of the Zagros Mountains in modern Iran. The Greek scholar Xenophon, who took part in the crusade of Cyrus the younger, praised that the rulers there were not only well-versed in the art of warfare, but also agriculture and irrigation as well and cultivated the planting of gardens in the provinces. In his socratic dialogue on domestic economy Oeconomicus, the so-called parádeisoi were referred to for the first time – lushly planted pleasure gardens. Xenophon translates the Persian word paradeiza (pariri for ‘surrounding’ and daeza for ‘wall’) with paradeisos, the Greek translation for the ‘Garden of Eden’. Translated into Latin, the term established itself in the European world. The work that Cicero translated and the humanists in the Renaissance studied contributed to the spreading of the concept of the geometric paradise garden throughout Europe.

2.  The Arabian Garden: Umaiyaden, Fatimiden, Mamluken and Nasriden (8 th -15 th centuries)
In 642 Taq-e Kesra (Ktesiphon) was almost completed destroyed by the Arabs. In the throne room of the palace the Islamic conquerors found a carpet depicting a garden, the ‘Spring of the Chusrau’. The pattern of this 26 x 11 meter large weaving out of silk illustrates a kingly garden with flower beds, waterways and pavilions. The work was destroyed as booty, but the image of the framed, refined and geometric ‘mandala’ of tamed Nature, in which the ruler was able to depict his power as a mirror image of the creation, also enticed the new rulers. In the following centuries the Koran’s concept of paradise made up the foundation of garden design in the Islamic world.
That the old oriental garden tradition was able to continue under Islam lies not in the least on the cosmological image content of the Koran. The Arabic word al-Dschannat´Adn (Garden of Eden) can be translated as a hidden, shady area filled with water, trees, flowers, and exotic scents.
Islamic gardens could be characterized by their homogenous, planar detailing. For irrigation purposes, the vegetation beds were sunken approximately 80 cm from the paths and their accompanying water arteries. The decorative plantings filled out the sunken garden beds and their blooms reached the level of the paths and water canals, which gave visitors the impression that they were wandering through a living carpet. Since the surface of the water of the sunken fountains and waterways ran at the same level as that of the paths and the courts, a continuous level was created suited to the typically ground-oriented seating traditions of the users and which made the garden to a large, open living room.

3.  The Persian Garden: Timuriden, Safawiden and Qadjaren (14 th -19th centuries)
As Ktesiphon fell, the conquerers discovered a sophisticated culture with rich architectonic traditions and building types. The Arabs introduced a new alphabet and a new religion that would impact the culture of the conquered areas: architecture, painting, calligraphy and gardens were infused with new symbolic meaning in order to strengthen the righteous through beauty in the faith. The Persian pleasure gardens gained a new spiritual dimension oriented towards the Koran. 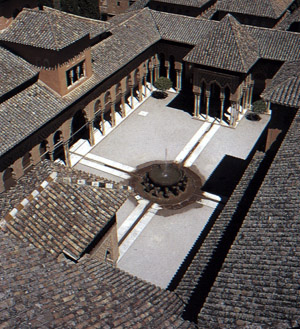 Within the span of only 100 years, Islam and the equation of the garden with heavenly paradise would spread to the Near East, North Africa, Egypt and Spain, and in the 16th century, all the way to India. The kingly Bagh-e Fin garden in Kashan embodies the essence of the Persian garden. It stages the contrast between the arid, uninhabitable landscape outside the walls and the lush vegetation within.  Outside, water is rare and valuable; inside it flows in abundance. Enclosed by a high wall, the garden is divided into a four more or less equal quadrants through watercourses. According to the Koran, paradise was made up of four to two pairs of grouped gardens in which symbolic fruits were cultivated: figs and pomegranate, olives and dates. The canals represented the four streams of life – water, milk, wine, and honey. Sweet-smelling fruit trees, such as oranges, stood in the flower beds framed with cypress. Typically Persian is the manner in which the side walls of the water pools were built higher than the surrounding earth and outer lying pools that captured the overflowing water. Still water underscored the cessation of time: it allowed the inner court and garden to become a timeless space in which the eternal universe appears in ephemeral elements. 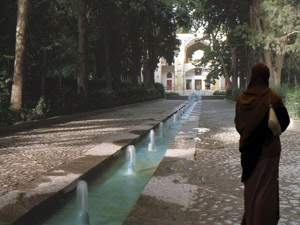 In contrast to the introverted gardens of the Persians and Arabs, the Ottoman garden abstains from the segmentation of forms and favors generous open gardens with a view. Even though not one example remains from the early times and the classical period of the 15 th -16 th centuries, the traditional Ottoman understanding of space and environment, its vision of nature, and the relationship between city and nature is still quite impressive. Its special quality is created by the tension between a few geometric elements and those of ’natural materials’ – plants and water. Each intervention, regardless of whether the objective is urbanization or the design of an open space, connotes the unquestionable acceptance of found forms. Often an exterior space, especially if it is to be a part of the public realm, is transformed alone by the fact that a pavilion is erected on the proper place, capturing the watercourse that has crossed it from time in memoriam. The basic elements present themselves with a formal ambiguity, with an autonomous and often non-orthogonal geometry and often in a  ‘picturesque’ manner.
The influence of the Ottoman garden on the Occident, which developed an independent form after 1453, cannot be underestimated. With the tension between axial and centripetal arrangements, it brought vitality and movement in the gardens. This is a phenomenon, which can be observed in the development of dramaturgy in the Baroque garden.