The Far East. Gardens in China and Japan

Chinese and Japanese gardens, although developed in different historical and geogra-phical contexts, show analogies; they both derived their composite character from the natural landscape of their countries. Both the Chinese and the Japanese terms for “landscape” (Shanshui in Chinese; Sansui in Japanese) literally mean “mountain water”, or “mountains and waters”, thus evoking the main components of the natural landscape in China and Japan. The two garden types share the intent of representing the basic characters of the natural environment in miniaturized and metaphorical form. Where they differ is in the manner of that representation.

Origin
The philosophical and metaphysical historical context which created the palimpsest of meanings implicit in the Chinese garden is characterized by two main doctrines: Confucianism and Daoism, both developed in the same period, the 6th Century BC.
Confucianism, with social relations and obligations as central to its teachings, looked at man working in a definite context, in society and within the family. Daoism, based on the principle of the unity of the cosmos, taught rather that he belonged to a vaster order of things: the purpose of life was to seek harmony with the forces of nature. 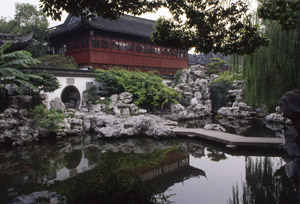 Wangshi yuan, “Garden of the Master of the Fishing Nets”, Suzhou (Photo: Rinaldi)

Both conceptions influenced gardens in China. The garden, as part of the family dwelling, was a place for social relations, but as a protected and isolated place it was also a space for meditation and contemplation of nature. This double philosophical inspiration was apparent in the radical juxtaposition of the conceptions of domestic architecture and of the garden: the former followed a geometric matrix based on symmetry and hierarchical relations among the parts, the latter remained rather the realm of spontaneity and imagination. In proposing a connection with the natural world, the garden maintained a complete formal autonomy, which neither had its source in the architecture of the main building nor was subordinate to it, as instead was the case in the western tradition. If the domestic structure responded to Confucian principles, the green space, in its search for a concentrated and allusive natural quality was rather a response to the dictates of Daoism and Buddhism, a later cultural and religious import from India, spread into China beginning in the 1st Century AD.

Spatial composition and Elements
This original method of composition was inspired by two traditions. On the one hand, Chinese gardens reflected the principles of geomancy (feng shui) which dictated the general practical rules for the position of volumes and voids and the conformation of paths. On the other, the gardens responded to the taste for a microlandscapes collection, a composition organized in episodes, with strong similarities to the pattern of landscape paintings, as represented in horizontal scrolls.
The aim of the composition of a Chinese garden is the modulation of perception in a visual narration presupposing movement through its different parts at different paces, required or suggested by the conformation of the spaces. The general development of spatial articulation in a Chinese garden is hidden from the visitor, and consists of a hierarchy of places and points. What reveals the Chinese garden to the visitor are the paths which act as active agents of the garden, organizing movement through it, establishing places to pause, to slow down or speed up in defining the rhythm of the garden’s unfoldment.

According to ancient animistic beliefs, rocks were the earth’s skeleton and rivers its arteries, living elements that were complementary in the harmony of the cosmos. Water and mountains, the basic elements of the natural landscape, represented the fertile juxtaposition between yin and yang, the dualism of the feminine and masculine aspects variously present in all natural phenomena. Thus every garden needs to evoke the mountains and bodies of water present in nature, even if only in metaphorical miniaturized form. The marriage of these two elements, emblem of the harmony infusing the cosmos, constitutes the primary goal of the creative effort. To these primary elements are added flora, whose changes introduces the dimension of seasonal cycles and therefore time into the garden, and architecture. The pavilions dotting the garden denote the human presence in nature and the central role of the individual in the imaginative and poetical interpretation of the landscape.

Origin
Japanese gardens were influenced by the Shinto, an ancient animistic traditional spirituality of Japan, whose practice is based on the worship of kami, spiritual essence. Kami can be human ancestors, personified deities, or those who pervaded specific places. Unusual topographical features and/or natural objects –  rocks, ancient trees, mountains, lakes – manifest the presence of kami, and are revered and considered to have an unusually sacred spirit around them. One of the Japanese word for garden – niwa – came to signify a cleared and purified space of ground for the arrival of kami.
Buddhism, introduced from China already in 552, and Daoism played a role in the development of Japanese gardens, as well as the Chinese gardens, and, starting with the Nara period (645-784), gardens incorporated elements and references to that specific tradition, featuring naturalistic landscapes with bodies of water, islands and rocky compositions.

Design and Elements
Japanese gardens express a predilection for a formal sobriety of rural inspiration, a compositional understatement which reached its peak in Zen Buddhist monasteries toward the end of the 15th century with the creation of Karesansui, dry gardens made up of a few essential elements: grouping of stones, raked gravel, moss. They were created as symbolic spaces for meditation and viewing.
A different type of garden consists in the great aristocratic Japanese gardens, the stroll gardens. They are organized as itineraries through a series of different scenes, to be experienced sequentially as the visitor walks along a prescribed route, as in China. But the composition of stroll gardens in Japan is more fluid than in China. They do not adopt those explicitly artificial visual devices of Chinese tradition like walls of separation between zones of the garden. 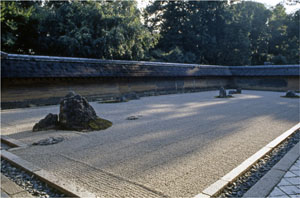